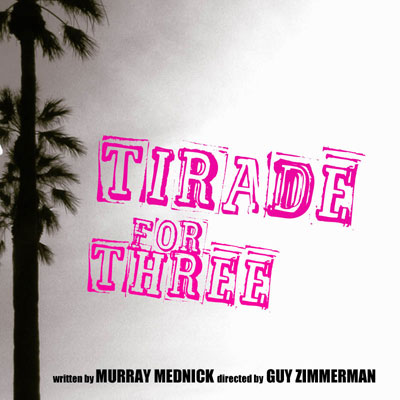 Tirade for Three is part one of Murray Mednick’s Gary Plays. First produced in 1997 under the direction of Guy Zimmerman, Tirade was inspired by a friend of the playwright whose son died in a drug deal gone wrong under the “dusty trees” of the San Fernando Valley. Gary, an unemployed actor down on his luck, visits the park where his son was shot, apparently at random. Struggling with murderous rage, he is joined by two “choral” figures, internalized voices that re-enact painful memories and goad him toward a moment of surrender. This moment of honesty does in fact arrive, and in the peace that follows Gary decides to do penance for his pride by carrying his son’s ashes to the sea. With its compressed, single-word lines of dialogue, Tirade for Three is a distillation of the tragic effect. Murray is finding it, “following where he leads,” and so, in a way, is Gary.

The literary cathedral of the Gary Plays self-catalyzes out of a single line of dialogue: “Here comes the king,” which is quickly followed by the sardonic rejoinder, “The king is here.” The king (Gary) then enters, a confused and cranky actor down on his luck and wanting to be left alone to mourn the death of his son. In this trenchant, vaguely vaudevillian exchange the entire series lies dormant, waiting to be “heard.”