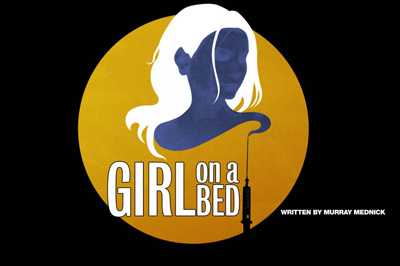 Girl on a Bed

Part III of Mednick’s Gary Play octet, Girl on a Bed directed by Guy Zimmerman at the Electric Lodge March 31 – May 8, 2005.

Girl on a Bed dissects an episode from Danny’s life that continues to haunt Gary. The play begins after Gary’s Walk (Part II), but we quickly flash back in time to when Danny was still alive. Using the stage as a kind of cinematic memory machine, Gary reconstructs an episode from Danny’s life in which he finds himself in a room with a girl who has just died of a heroin overdose. This girl is Laura, a teenager of unusual intelligence who runs headlong into her own death. In addition to Marcia, Gloria and Antonio, we meet Laura’s parents (Monica and Charles), her best friend (Rena) and Rondell, a drug dealer and modern-day Tiresias. Fearless and aware, but lacking wisdom, Laura has the courage to question the American delusion that life can be “won,” as if it were a game of some kind. Mortal beings, we are by definition “losers” in the end, and as such owe each other compassion. At work on Laura also are the historical debts of white America, Rondell and Antonio representing in part the age-old evils of African slavery and slaughtered Indians returning now for an accounting. Gary takes all this in, not looking for answers so much as moving closer to a poignant mystery that lies at the heart of this girl’s dark fate. The coiled impact of the play’s final moments recalls the shadow plays The Hawk and Are You Lookin’, of Murray’s younger days on the Lower East Side.
Guy Zimmerman

“A staging of The Gary Plays, the first three works in a tetrology by Murray Mednick, is one of the most engaging and ambitious local theater events of the past few seasons…. Mednick’s Gary is a sort of L.A. Leopold Bloom… The Los Angeles River may be a mere trickle compared to the River Liffey, but The Gary Plays surge with a desire to find–in the seemingly mundane wanderings of one man–the very soul of a city.” – James C. Taylor, KCRW Theatre Talk

“Under Zimmerman’s seamless direction… Mednick finds a… moving vehicle to convey his own despair at our culture’s soul-sickness. ‘Girl on a Bed’ is a direct hit at the broken heart of the matter.” – Rob Kendt, Los Angeles Times

“ ‘Girl on a Bed’ turns Greek tragedy into a kind of metaphysical movie… a haunted and haunting evening of theater that tells us our lives are often not about us, but other people. PICK OF THE WEEK! “ – Steven Mikulan, LA Weekly