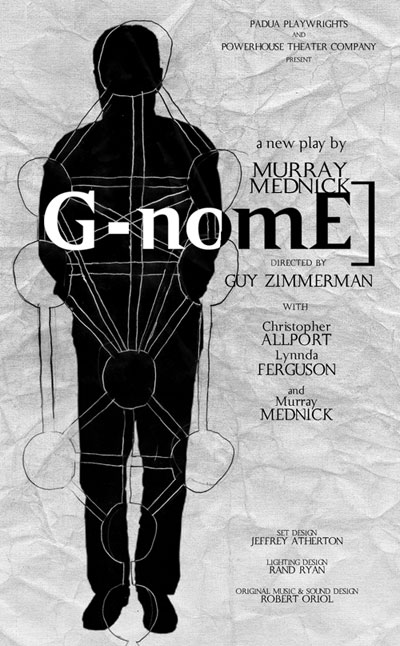 Performed by three actors, G-nome, is a theatrical-ized meditation on heredity – what we inherit from our ancestors, how psychological patterning plays out in the shape(s) our lives take. The play continues Murray’s exploration of dialogue as a form of “spoken music,” which conveys emotional tone directly. At the same time, there is a story-spine in the piece and it concerns an older man, a writer, contemplating the close of life and questioning it’s meaning. He looks back at all the anguish in his early life, anguish he hasn’t fully been able to shake, and he looks at two of his literary heroes, Primo Levi and Paul Celan, both Jewish Holocaust survivors who eventually took their own lives. In the end, the “protagonist” of G-nome comes down on the side of life, and the specific beats of his journey form the body of the play.

A co-production with The Powerhouse Theatre Company, G-Nome opened in July of, 2003. It was directed by Guy Zimmerman and produced by Guy Zimmerman and Daniel Millner, with set by Jeffrey Atherton, lights by Rand Ryan, costumes by Miguel Montoya, original music and sound design by Robert Oriol, and the following cast: