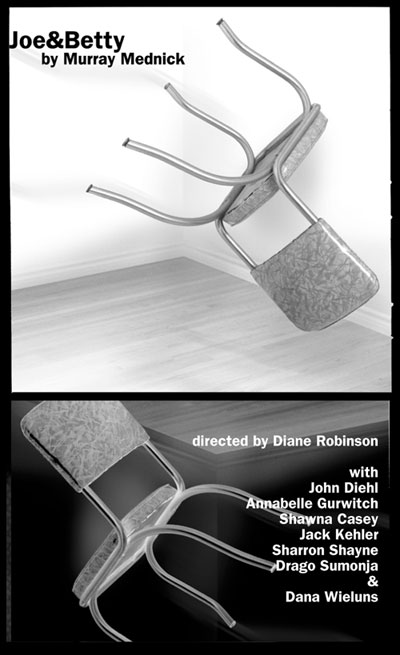 NOTES ON THE PLAY
This fierce, darkly humorous play is about a poor Jewish couple living in the Catskills in 1951. “It’s autobiographical in its essence, but it’s fiction as a literary artifact,” notes Mednick. “It takes place the year my grandmother died that was a big thing for me. The play is composed of crystalized, musical flashbacks to the kind of verbal boxing match that was continuous between my parents. There was a desperate, destructive anxiety and hysteria that had been handed down the cumulative result of generations of impoverishment and persecution that was common among Eastern European Jews at the time and that took its extreme negative form in my parents.”

The action traces the disintegration of the playwright’s impoverished family. Overwhelmed by the harshness of life, “Matinee” Joe Brasman, the father, a part-time projectionist at the local movie house, loses himself in desperate, illicit sex with an underage girl. His wife Betty, a woman deeply scarred by her mother’s cruelty, and utterly unprepared for the rigors of child rearing, struggles ferociously to extricate herself from the trap life has set. Failure for both characters is certain, yet the playwright never allows us to pity them in a facile way.

The play opens full – throttle as Betty shatters the household’s fragile equilibrium by refusing Joe’s sexual advances. At the end of the first act Joe’s mother dies, accelerating the couple’s mutual estrangement and disintegration. In terms of narrative, not much else happens; Joe and Betty isn’t about the characters getting anywhere. Rather, the playwright pulls aside a curtain and holds it open long enough for their presences to fully register, and it’s the fading away of this encounter that produces the cathartic effect. At the close of the play the two lead characters are alone together, waiting for the authorities to arrive. It remains uncertain whether this arrival will take the form of an ambulance for Betty or a police cruiser for Joe.

The play’s secondary characters flesh out this harsh world. For solace, Betty has only her “friend” Dot, a bitter anti-Semite. Dot’s husband Stan, a man even more befuddled than Joe, gets revenge on his emasculating wife by steering the over-sexed Joe toward his step-daughter Arlene. Hilda, the middle-class social worker, schemes with Joe’s mother to make off with one of the children. The most benign presence is Molly Kaplan, the fire-breathing landlady, and some new level of despair is reached when we realize it’s Betty herself, and not Molly, who is keeping the heat turned off.

In many ways, Emile, the 11 – year old child who exists solely off – stage, is the play’s central character. Emile is ever-present, as an off-stage character and as, more crucially, an aspect of the playwright himself. He is not only the traumatized child referred to by the adults in the play, the boy who steals and gets in fights, Emile is also the playwright of refined sensibility who has authored the intricate text unfolding on stage. By the close of the play the child Emile has stopped talking, and yet on another level every word of the play is being “spoken” by Emile, as Murray Mednick. Without fanfare, big ideas are being coaxed onto the stage. By the action of what force, we are forced to wonder, was this play written? Are we talking about “grace” here? Or the random workings of a mechanistic Fate? Or perhaps only Betty’s tough, defiant genes? When Betty says “Some people have all the luck,” after all, she’s not just making conversation. Being Jewish, the voice of Job echoes in Betty’s complaints. There is no reasoning with the “God” at work in the play, no appeal to innocence or other incidental attributes of the self. And when Betty, warned about her son’s complete withdrawal, says, “He should be forever grateful. To his mother,” we note that, on a theological level at least, she’s not wrong at all.

Joe and Betty opened at 2100 Square Feet Theatre, Los Angeles, on May 26th, 2001. It was directed by Diane Robinson with set by Jeffrey Atherton, lights by Rand Ryan, costumes by Bridget Phillips, original music and sound design by Robert Oriol, and the following cast: