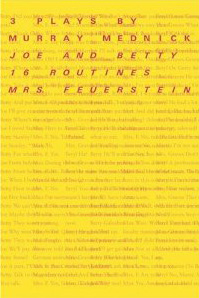 This anthology presents the most recent work of Padua’s founder, Murray Mednick. All three plays were produced in Los Angeles in 2001; Mrs. Feuerstein was produced at New York’s Chashama theater in November 2001, and Joe and Betty at the Jose Quintero Theatre in New York in May 2002. Joe & Betty re-opened in New York in October 2002.

Joe & Betty brings us into the darkly comic world of an impoverished, disintegrating family in the Catskills of the 1950s.

16 Routines takes us on a surreal comic journey into the panicked mind of an actor who has forgotten his lines.

Mrs. Feuerstein explores themes of revenge and redemption as a possibly unhinged Holocaust survivor devises her revenge on a German couple by writing them into her play.

More than any contemporary playwright, Murray Mednick has made the present moment his artistic terrain. As I noted in the introduction to his Three Plays, Murray’s plays are vehicles designed to deliver us collectively into the present, and to help us make sense of the journey there and back. They speak to a part of us that is unconditioned and radically free, and in so doing help to reconcile us to our own mortality.

From Shakespeare to Brecht, most good playwrights have been poets, and the plays collected in this volume illustrate why this should be so. Even while modern dialogue has progressively sought the condition of every day speech, good playwrights remain fiercely interested in the subtle nuances of the spoken line. Today, as always, the power of a piece of dramatic writing depends on how skillfully the playwright has been able to knit the spoken word to a stillness and silence that reside beneath language. The sign of this covert musicality is the sense we get, while hearing a play by Murray, say, or by Maria Irene Fornes (or by the many playwrights Murray has mentored), that each line is bootstrapping itself into existance, creating anew the various aspects of character and situation that make up the world of the play. The play’s claim on reality, in other words, is re-created line by line, and the fact that there is no assurance of continuity means that surprise and revelation are always present.

Murray’s essentially poetic approach to theatre-making involves the audience in creative work. It demands that we hold in mind two things simultaneously; each moment as literary and theatrical artifact, and each moment as something with a lurid existance all its own. The kinetic interplay of the illusory and the real becomes itself the spectacle Murray asks us to witness, even as we participate in its generation. The world conjoured in this way is illusory on the one hand…and also every bit as real as the world we inhabit outside the theatre. Consciousness itself, the aesthetic suggests, is conjoured moment by moment out of a complex weave of sense impressions, emotional material, mixed in with something finer and more authentic. Contact with this more real aspect of our being is what generates the intense and vertiginous emotional states that afflict Murray’s characters. And this is where the awe, pity and terror associated with Classical tragedy and catharsis enter the picture. The great actors who gravitate to Murray’s work, actors like Ed Harris, Norbert Weisser, Lynnda Ferguson, John Diehl and Annabelle Gerwitz (to name just a few), understand directly how to jump on the magic carpet of Murray’s dialogue to take the invigorating ride toward the real.

THE AUTHORS Brooklyn-born Murray Mednick founded the Padua Hills Playwrights workshop/Festival (now Padua Playwrights) in 1978. He was for many years a playwright-in-residence at New York’s Theatre Genesis, where he was artistic co-director from 1970 to 1974, when he relocated to California. He received the American Theater Critic’s Association Best New Play Citation for Joe & Betty in 2002. He is the recipient of two Rockefeller Foundation grants, a Guggenheim Fellowship, an OBIE, and several Bay Area Critics Awards.

Guy Zimmerman is a playwright, director, and the Artistic Director of Padua Playwrights.