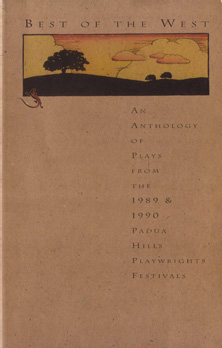 Best of the West: Plays from the Padua Hills Playwrights Festival, 1991-1995 Foreword by John Steppling

The Padua Hills Playwrights Festival, renowned as a stronghold of fiercely intelligent, contemporary theatre, ran from 1978 through 1995 in the foothills of the San Gabriel mountains near Los Angeles, attracting theatrical talents such as Sam Shepard, Jon Robin Baitz, Maria Irene Fornes, John Steppling, and David Henry Hwang. With roots deep in the Off-off Broadway theatre of the 1960s and 1970s, Padua offered true word-based theatre, a heady mix of street dialog informed by the Classics, from the Greeks to Beckett and beyond.

Resurrected in 2001 by founder Murray Mednick, Padua is at last able to offer in book form ten superb plays chosen from the final years of the festival, 1991 through 1995. Included in the anthology: