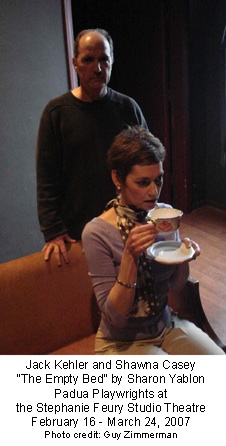 NOTES ON THE PLAY
Having worked closely with Sharon Yablon for over ten years now, it’s a pleasure to see her unique voice reach full maturity with The Empty Bed. Diane Arbus once described the arresting subjects of her photographs as “aristocrats,” because the worst has already happened to them. The statement applies equally well to Sharon’s characters. They gaze back at us from across a gulf of fear – our fear – with an inner calm we can only envy. Like all of Sharon’s plays, The Empty Bed examines the strangeness of our existence as bodies – these odd collections of tissue and bone that age and then die – and the issues of desire and power that arise from this. Here it is the body of the mother, who is dying off-stage, that shadows every moment in the play. As they struggle to come to terms with her mortality, Jeremy and June reach out to each other in ways that are poignant and complex.

Ungainly at first, Sharon’s characters get under our skin. They seem to exist free of our squeamishness about who and what we actually are. More subversively, they’re charming, working their way into our affections even though we aren’t quite sure we should trust them. Once inside, they start making trouble, drawing our gaze to those corners of our lives we’d prefer to ignore. Over time we become aware of the courage behind their honesty, and Sharon’s plays begin to shift from the comic toward the tragic. Meanwhile, as in a dream we can’t wake up from, the characters keep coming at us.

When two emotionally damaged and gun-shy people find themselves attracted to each other, the result tends to be tentative at best — a kind of emotional stuttering, where nothing can quite be said without being retracted, and they can agree neither to come together nor to part. So it is with Sharon Yablon’s vaguely Pinterish one-act.

The scene is a living room. A man, Jeremy (Jack Kehler), enters through the front door carrying a skimpy bag of groceries. From another room comes Miss Pickering (Shawna Casey), looking startled and a little apprehensive. It’s clear neither knows who the other is or why he or she should be there. Pickering has been hired as a caregiver to an elderly lady, who has had a stroke. Jeremy, it presently appears, is the old lady’s son, who has been away and who didn’t know about the stroke. They’re clearly attracted on some level, but he’s straightforward and slightly crude, while she is prim and buttoned down. Their conversation is fragmented and tends toward non sequiturs.

But gradually they get to know each other, and we get to know them. He’s
eager but fearful of being encroached upon. She’s passive but hopeful. Each has had an emotionally abusive parent and a brush with abortion. Jeremy dumped his girlfriend after forcing her to abort her child; Pickering was abandoned by a man she loved and by accident or intent lost his baby. Their relations constitute a strange, dynamic stasis.

Yablon’s script is canny, funny, and enigmatic, and she directs it with a fine feeling for the nuances and the large emotional gaps. Kehler’s Jeremy is very much an ordinary guy, alternately brash and hesitant, interested and ready to grab what he wants but wary. Casey’s Pickering hides painful yearnings beneath her old-maidish exterior. The two actors play off each other with skill and sensitivity, fashioning an evening that is as elegant as it is eloquent.