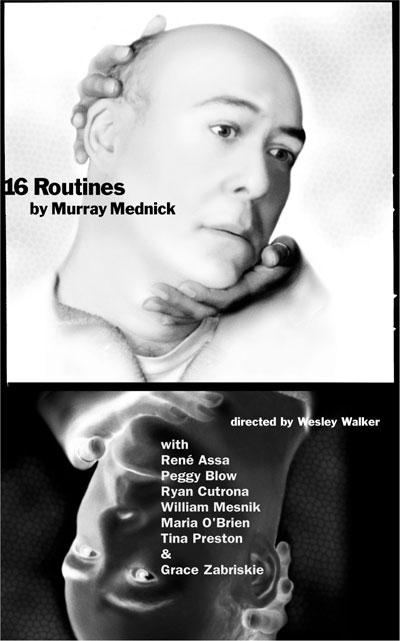 In this absurdist comedy, Mednick explores the travails of Martin Greenspan, a former vaudeville performer who “went up” on stage (forgot his lines) and never came “back down.” Convalescing in a home for “distressed actors,” Martin is tormented and inspired by his former stage partner; by a husband-and-wife team of former television actors; and by unhinged members of the medical staff. The story unfolds in sixteen short, stylized scenes, each one a spectral and surreal
vaudeville “routine.”

“Ultimately, the play is concerned with questions of authenticity,” explains Zimmerman. “Trapped in his various routines, Martin Greenspan tries to recover a feeling of being awake and present in his life. It’s a struggle that’s rife with comedic potential.”

“The play is darkly humorous,” adds director Wes Walker. “But the humor comes out of pathos, rather than one-liners.”

Sixteen Routines opened at 2100 Square Feet Theatre, Los Angeles, on April 6, 2001. It was directed by Wesley Walker with set by Jeffrey Atherton, lights by Rand Ryan, costumes by Bridget Phillips, original music and sound design by Robert Oriol, and the following cast:

NOTES ON THE PLAY
With nods to Beckett and Pirandello, the text is unerringly original. As adventurous in its way as anything in Murray’s large body of work, it’s also full of recognizable qualities. For example, the way the fast-paced vernacular rhythms work to smuggle onto the stage ideas of real scope and magnitude. And how the language contains and directs the action of the play, driving the characters into a “rhapsodic” awareness. The sheer enjoyment of stage “business” is also a signature quality, as obvious here as in The Coyote Cycle or Shatter ‘N Wade.

Plays evolve in a complex and elusive manner, and yet the seeds from which they spring may be revealing. With 16 Routines, I recall a story Murray used to tell about acting the part of “Richard” in John Steppling’s play Theory of Miracles (in the 1989 Padua Festival.) Performing the role was an interesting challenge for someone who mostly stays in the wings. But then one night Murray forgot every last word of a crucial monologue and it got really interesting. He sat there in the lights dumbstruck, confronting the Void. The seconds ticked by. Nobody spoke. Finally, the lights dimmed to black and the play moved on, and it was only one performance in the run and one Padua Hills Festival among many. John thought it was Murray’s best performance, but Murray generally shudders when he tells the story, shudders and then laughs. Being a playwright rather than an actor, this experience eventually blossomed into the “rhapsodic comedy” named 16 Routines.

The setting of 16 Routines is described as a “home for distressed actors,” but as the characters are kind enough to point out, this isn’t a “real hospital.” Rather, the action takes place mid-way between the “real” world of the audience and the “fictional” world of scripted drama. The protagonist, an ex-vaudevillian named Martin Greenspan, inhabits the shadow world Murray encountered that night on stage – the land of the actor who has “gone up.” This odd and hyper-energized zone is flanked on the one side by the garishly lit stage of vaudeville and on the other by the austere ante-chamber of Classical tragedy. And of course we in the audience sit close by as well. As the action unfolds we find ourselves implicated in Martin’s dilemma in ways large and small. For Martin, we in the audience seem to embody an implacable awareness of quasi-divine intensity and focus. But the barrier separating us from Martin has reflective qualities as well, such that the play ends up posing unsettling questions. Given that we all inhabit a world which reels on regardless, for example, what is the obligation each of us feel to “remember our lines?”

Murray’s trademark strategy as a playwright is to tug loose threads like this to see what will unravel. In this case he does so with a wry wit laced through with compassion.