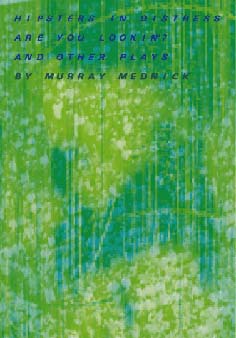 Hipsters in Distress: Are You Lookin? and Other Plays
Purchase on Amazon

Are You Lookin’ and Other Plays Murray Mednick
Padua Playwrights Press

From the Introduction:
Shortly before his own death, the poet Czeslaw Milosz wrote a eulogy for Allen Ginsburg. Milosz praised Ginsburg’s courage, his willingness to live out extremities. “Great poet of the murderous century,” he writes, “who persisting in folly attained wisdom.” These plays by Murray Mednick speak to a similar persistence. They depict characters who lean fully into their own confusion, in search of transformation, and they embrace the seemingly foolish idea that theatre, like poetry or music, is first and foremost an art form, able to elevate those it engages. Playwrights coming of age in this new era of threat and dread will find these plays highly relevant, and this bodes well for their fate in the long term; what artists of the future find useful is what survives.

To call the protagonists of these plays “hipsters” is to link them to the American urban counterculture of the late 1950s. One way or another, Mickey of Are You Lookin?, Peter of Heads, Matt of Scar and the rest are fugitives from the era of Ginsburg and Burroughs, Miles Davis and Ornette Coleman, the pre-hippie era when cool was equal parts Eros and Thanatos. Their “distress” comes from a deep connection to states of anxiety, intense longing and regret that afflict and harry the soul. Seeking to liberate themselves from habitual stupidity, these characters tap into an awareness that assaults and disorients them. This awareness has an implacable quality, rendering their voices cruel or plaintive depending on whether they embody it, or serve as its object.

“A playwrights’s playwright Mednick has spent his career at the forefront of avant-garde theater.” – Sandra Ross, LA Weekly

This collection includes Are You Lookin’, Scar, Heads, Skinwalkers and Dictator.