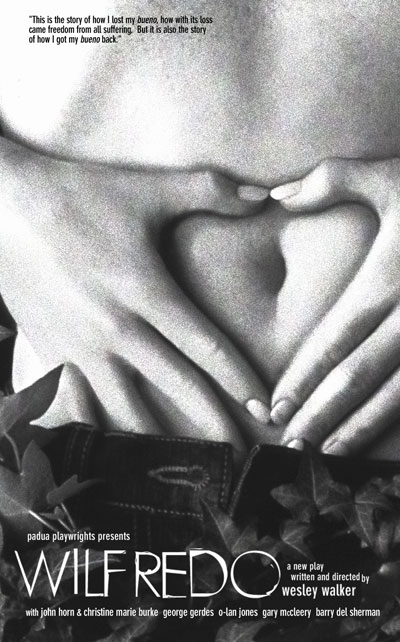 Third in a triptych of Boschian portraits of So Cal life (after “Freak Storm” and “The Conception”) “Wilfredo” displays Walkers characteristic generosity in the face of the human grotesque. We laugh while watching his plays because we recognize ourselves in his distorted but inherently cheerful characters. The sophistication of Wes’ stage craft amplifies the effectiveness of his assault on the physical body – our being at its most vulnerable. Among other things, his background in music has given Wes an uncanny feeling for how to energize the theatrical moment. His basic strategy is one of sensory overload; the imagistic blitz of the dialogue and the direction are aimed at disarming our psychic defenses. It’s an approach that links Wes’ work to that of the “post-modernist” playwrights such as Len Jenkin, Richard Foreman and Mac Wellman, but to my mind anyway, Walker demands much more from himself line by line and on a thematic level as well. Here, his concerns include those of classic tragedy – the undoing of Wilfred, the king and patriarch, lynchpin of meaning in this small kingdom South of the border. The connection between fraternal rivalry and sacrifice are major concerns as well. On a literary level the play evokes Juan Rulfo’s classic Pedro Paramo (which concerns a journey to Comala, Wilfred’s hometown), the “local” characters enlivened by their closeness to vivid Pre-Colombian myth…and to its Christian counterpart.

Overall, the startling impact of Wes’ writing comes from the immediacy of his process – his willingness to be surprised in the act of writing and his penchant for recognizing valuable material within uncomfortable impulses. This surrender to that-which-is-hidden unites his work with that Mednick, Fornes and Steppling, though the effects of Wes’ plays are so utterly original as to make the Padua connection, in some ways, a surprise. Finally, as with Steppling and Kelly Stuart, Wes Walker proves that Los Angeles remains a nurturing ground for vital new voices in American drama, voices to be prized by all those who value the inherently mysterious phenomenon called theatre.

“I’M HAPPY I UNDERSTAND SO LITTLE–I WISH I UNDERSTOOD LESS,” declares an amiable cuckold in Wesley Walker’s “Wilfredo” from Padua Playwrights Productions. He’s come to the right place. Conventional expectations of theatrical meaning and content are a liability in writer/director Walker’s surreal collision of banal Southern California existence with the fluid boundaries of ancient mythology and the dream world. Set in a highly stylized Tijuana saloon, Wesley’s fertile imagination weaves a hauntingly beautiful and at the same time ominous series of elliptical encounters between people who act out of unfiltered impulses rather than socially dictated norms. The barkeep Wilfredo (John Horn), sets the tone with his obsessive insistence on not being addressed by anything other than his proper name. With perfect dry timing, he catalogs his unacceptable nicknames and the reasons why–as if reality can only be defined by what it is not. What matters most to Wilfredo is his “bueno”–his life force, embodied in a pair of coins he’s stolen from the clueless cuckold Nester (Barry Del Sherman), the antithesis of his all-wise Homeric predecessor, Nestor. While at bottom this is a simple boy-meets-bueno, boy-loses-bueno, boy-recovers-bueno story, forsaking the mundane world of cause and effect for the unconscious leaves an expansive canvas to play with. It’s also a frustrating one to try to parse for literal sense. The best way to appreciate this work is to let it wash over you, and let its message emerge from the often poetic repetition of phrases and themes. The effort is rewarded, thanks to exceptional performances that wring intriguing characters out of Walker’s opaque slates. As a pair of American visitors who oscillate between control and helplessness, George Gerdes and Jack Kehler dissect shallow L.A. values as they lurch about in the throes of conflicts that harken uneasily back to Oedipus. Both are attracted like moths to the pretty barmaid Roberta (Christine Marie Burke), an enigmatic, absent-minded muse with overtones of Medea. O-Lan Jones is an earthy presence as Nester’s wife. Walker’s evocative staging makes brilliant use of music by Robert Oriol–some of the images linger like dream fragments long after we’ve returned to more familiar landscapes.